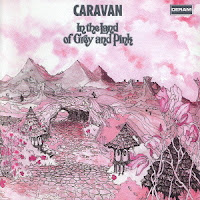 Places I remember: About 20 years ago, a colleague at Cambridge High School gave me his copy.

Fab, and all the other pimply hyperboles: In The Land Of Grey And Pink

Active compensatory factors: The space and light in these songs is unique to time and place - the early seventies Canterbury prog scene (kind of debunked as a 'scene' in Mike Barnes' A New Day Yesterday but a handy way of positioning bands like Caravan).
First track Golf Girl sets out the band's 1971 wares brilliantly as a whimsical story and sounds float and curl around a gentle beat. The rest of the album builds on that start and if these medieval folk/jazzy /rock sounds don't do it for you you don't like prog.
Me? I really love this stuff. Caravan never really sounded like this again as this was their last album with this particular lineup, so it is an ideal snapshot.

Where do they all belong? A cornerstone of my prog collection.
Posted by Wozza at 10:06 AM No comments:
Email ThisBlogThis!Share to TwitterShare to FacebookShare to Pinterest
Labels: Caravan 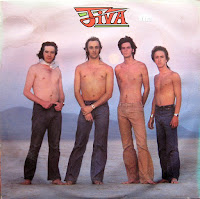 Fab, and all the other pimply hyperboles/ Gear costume: It pretty much all sounds the same. Something's Goin On Inside LA was the single and lead track on their sole album so let's go with that.

Active compensatory factors: I'm sure they look back at that cover and cringe. Four American guys with their shirts off saying, "please take us seriously".
Jiva, from California, comprised: Michael Lanning, Guitar, Vocals; James Strauss, Bass, Vocals; Thomas Hilton, Guitar, Vocals; and Michael Reed, Drums, Percussion.
The music I've summed up before when writing about Dark Horse label product. I was a tad harsh then, but listening to it again made me think of a descriptor I've heard used in my English teacher role while marking essays - competent stodge.
It's reasonably well played and competently sung but there is nothing out of the ordinary happening here. Lord knows what George heard from this first American band to get a Dark Horse spot that made him think - I've got to put that out!

Where do they all belong? Alongside the other Dark Horse albums that are, on the whole, not a patch on the Apple Records roster.
Posted by Wozza at 10:13 AM No comments:
Email ThisBlogThis!Share to TwitterShare to FacebookShare to Pinterest
Labels: George Harrison, Jiva 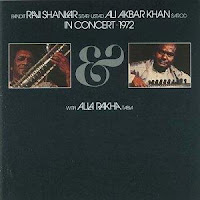 Fab, and all the other pimply hyperboles/ Gear costume: Raga Manj Khamaj  (it's split over two sides - sides 3 and 4 but it's drone effect is very hipnotic and very rewarding if you've had a tough week)

Active compensatory factors: I don't play this album often but every time I do it affects me deeply - very soothing and contemplative.
Ravi's spirituality and calmness was a great inspiration to George Harrison and countless others. I don't pretend to understand this music or the meanings behind it, but I do really enjoy allowing it into my life from time to time.

Where do they all belong? Prominent position in my Apple Records collection.
Posted by Wozza at 8:14 AM No comments:
Email ThisBlogThis!Share to TwitterShare to FacebookShare to Pinterest
Labels: Ali Akbar Khan, Apple Records, George Harrison, Ravi Shankar 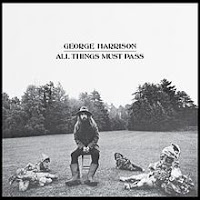 Places I remember: DJ Records (Otahuhu). This is one of those albums I saved up for and dad got for me on his way home from work in Otahuhu while I was at school.

Fab, and all the other pimply hyperboles: Awaiting On You All

Active compensatory factors: For three sides this is peerless, brilliant music from George and friends. The fourth side is, quite frankly, filler. I Dig Love and a reworked Isn't It A Pity don't cut it really, but by side 4 you are past caring because the quality is so consistently high on sides 1 to 3.
The jam album (sides 5 and 6) I can do without - it's jamming after all, and I don't really think about it as part of ATMP, but it's nice to have all the same.
It's those first 3 sides that do it. All killer!
Beginning with the Dylan co-written I'd Have You Anytime, through the pop master classes of What Is Life?, My Sweet Lord (regardless of subsequent baggage this is a GH song - end of), Isn't It A Pity, Apple Scruffs and on to the other worldly Hear Me Lord, Beware Of Darkness and, always my favourite track - Awaiting On You All.
The variety and consistency is outstanding - the tracks I haven't mentioned already would be another artist's greatest moments.
Obviously, there were hints in The Beatles (Something, Here Comes The Sun) that George was special, but clearly this amount of stunning songs in one place was a major surprise. Lennon/McCartney were the genius Beatles weren't they? Ringo and George were the lucky ones weren't they? Well, that was the received wisdom for a while.
Haha!! No way - George and, yes, Ringo, have unique talents as musicians and writers. All Things Must Pass is just the first outstanding example of that in George's case.

Where do they all belong? I haven't bothered with the reissue editions - I don't want to detract from the original experience of this classic album. Don't want to see behind the curtain for this one.
Posted by Wozza at 10:07 AM No comments:
Email ThisBlogThis!Share to TwitterShare to FacebookShare to Pinterest
Labels: Apple Records, George Harrison, The Beatles 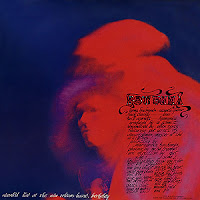 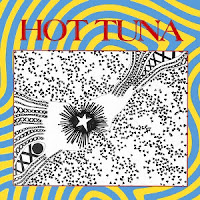 Fab, and all the other pimply hyperboles: Keep Your Lights Trimmed and Burning (appears on both first 2  albums)

Active compensatory factors: The yin and the yang of Hot Tuna are on display in these first two live albums. The debut is acoustic folk/blues material. Their second outing (First Pull Up etc) is an electric blues album. 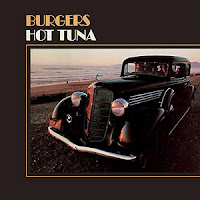 Both are good but FPUTPD is a blistering live set with Papa John Creech on board and duking it out with Jorma and Jack to magnificent effect! Side note- the CD sets are good to have for the extended tracks not originally on the first two vinyl albums.
Papa John's fiddle really jells with the Hot Tuna blues style and he and Jorma mesh brilliantly. Jack Casady's fluid, melodic bass is a standout, always. The man is cool personified!
The combo was intact for the third featured album here - Burgers - their first studio album and their first for Grunt Records. A five star classic album all the way.
The sound on Burgers is another development over the live albums with the band captured at an early peak with this lineup.

Where do they all belong? A lot more Tuna to be served up.
Posted by Wozza at 10:26 AM No comments:
Email ThisBlogThis!Share to TwitterShare to FacebookShare to Pinterest
Labels: Grunt Records, Hot Tuna, Jack Casady, Jorma Kaukonen, Papa John Creach

It came out of the sky (Creedence Clearwater Revival) (LP 737) 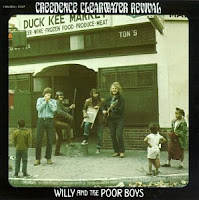 Places I remember: The Warehouse (Hastings)

Fab, and all the other pimply hyperboles: Fortunate Son

Gear costume: Feelin' Blue
Active compensatory factors: I have neglected Creedence Clearwater Revival unfairly over the years. Like every music fan on the planet I love the singles the band cranked out so for many years I contented myself with their Greatest Hits album - wall to wall amazing songs!!
Aside from Green River which I got early on, it has been a gradual catching up. This one is hailed by many as a classic but for me it's a near miss.
And the problem is that the big hits stand out on their albums, and so that means there is a tendency to view the other songs as lesser quality.
That's the potential case here as familiar hits like Down On The Corner, Fortunate Son, and The Midnight Special rule the roost. Other songs are in the shade but listening to them fifty years later reveals some true gems: It Came Out Of The Sky; Feelin' Blue (great swampy rocker); Cottonfields.
The inclusion of Poorboy Shuffle and Side Of The Road feel a little too much like filler - hence the four star rating.
Where do they all belong? Alongside the Greatest Hits in the vinyl collection (rest are on CD).
Posted by Wozza at 11:08 AM No comments:
Email ThisBlogThis!Share to TwitterShare to FacebookShare to Pinterest
Labels: Creedence Clearwater Revival, John Fogerty 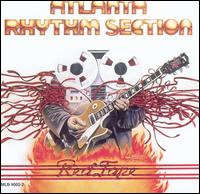 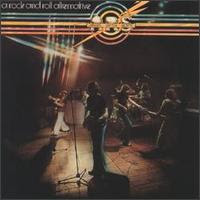 Places I remember: These have come from Spellbound Wax Company, Real Groovy Records and Vinyl Countdown over the last few months as I embarked on a catch up of the back catalogue.

Fab, and all the other pimply hyperboles: Another Man's Woman (Red Tape) - stretches out nicely! 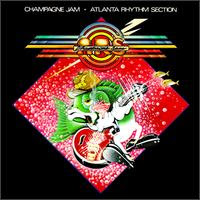 Active compensatory factors: These boys are not the best looking southern rockers out there (I'm not sure who is but it ain't ARS) but they sure play purrty.
Red Tape is quite a rocky set and the band is blessed with the vocal ability of Ronnie Hammond - he appears on all four albums, as he lifts them out of the run of the mill. Rock and Roll Alternative hones the sound into a slicker operation - still nice variety throughout with pop, rock, country rock all getting a look in. And the mellow ballad - So In To You was a big hit.
Champagne Jam was the big seller on the back of two hits - Imaginary Lover and I'm Not Gonna Let It Bother Me Tonight. By the eighties album The Boys From Doraville Robert Nix had said adios amigos and punk rock diverted attention from these good ole southern rock boys. It sounds like ARS but the thrill had gone. 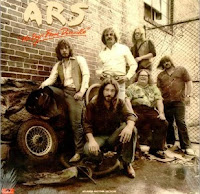 Aside from Ronnie Hammond's distinctive vocals, the other aspect that produced a successful formula was the songwriting team of drummer Robert Nix (lyrics) and keyboardist Dean Daughtry (producer Buddy Buie gets a credit on nearly every song but who knows what his creative impact is).
They could certainly write some great hits - Sky High (with Hammond), So In To You, I'm Not Gonna Let It Bother Me Tonight, and Imaginary Lover were high water marks on these albums.

Where do they all belong? They join Are You Ready? - the excellent live double they released in 1979 in the southern rock section.
Posted by Wozza at 11:06 AM No comments:
Email ThisBlogThis!Share to TwitterShare to FacebookShare to Pinterest
Labels: Atlanta Rhythm Section
Older Posts Home
Subscribe to: Posts (Atom)

There will be an answer

I pick a moon dog

You know my name, look up the number 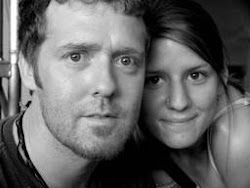 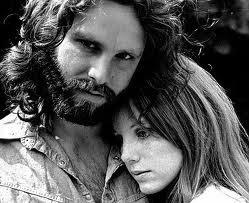 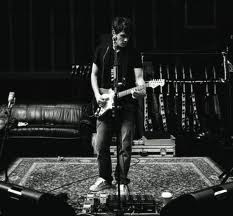 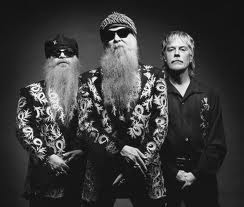 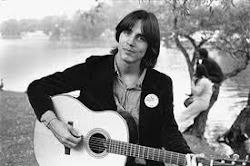